I used #Plotagon to make this comedic video.

I’m making a series of cartoons to go with a novel I’m writing. This is when Janey meets Oliver again.

I compiled this draft illustration for a book I’m writing. I can’t remember exactly which Apple and Android apps I used for Prudence, but I coloured the wizards picture using Gimp on PC.

I used a different Android app today and look at what’s happened.

I really do have to write this chapter now!

Fabia and the Magic Mirror by © Jacqueline Miller 3rd August 2015

This is a picture I drew using my finger on my ipad2. I was just messing about when, suddenly, Fabia appeared looking into a magic mirror.

I coloured it in using a program on PC and some Android apps the next day.

Fabia is a character in a Fantasy novel I’m writing. This has been my Campnano project during July.

I was playing around with an old app which I’d never used on my ipad2 at the weekend, and the drawing above appeared. Fabia is a main character in a book I’m writing, but whose reflection is it in the mirror?

This is the first time I’ve done any drawing since my father died a few months ago.  I participated in Campnano during April and July this year which has kept me busy writing my fantasy books.

Posted on May 18, 2015May 24, 2015 Posted in UncategorizedTagged Artwork, Book, drawing, fantasy.Leave a comment 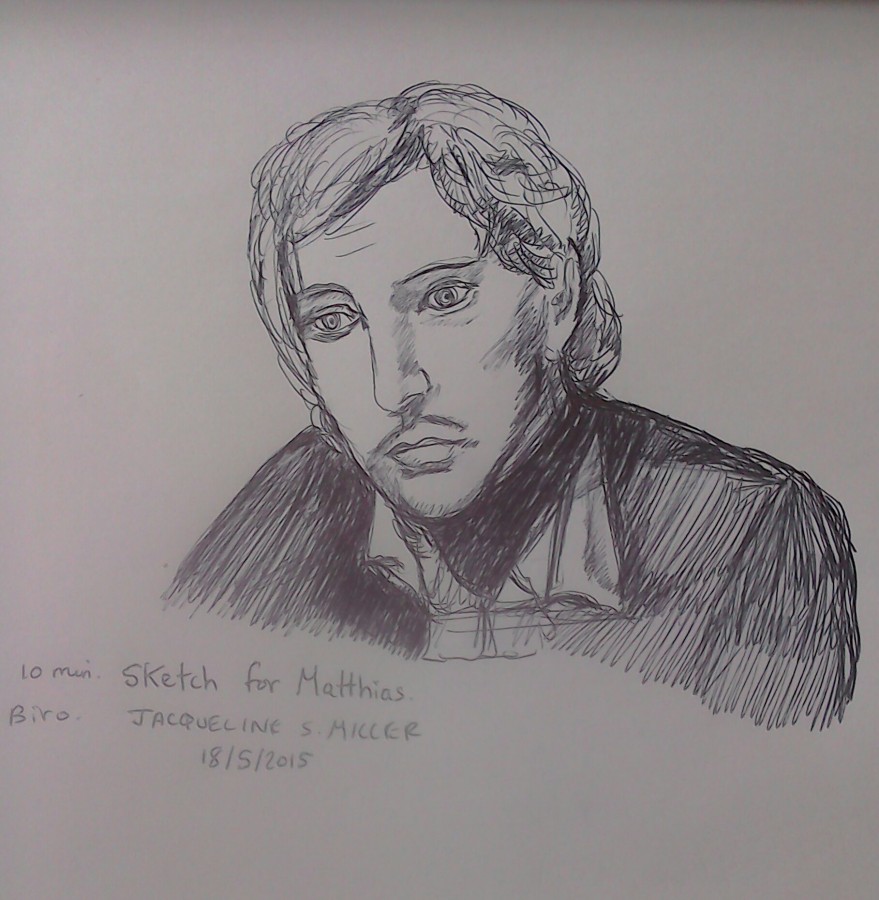 I’m writing a fantasy novel and like to draw pictures of the characters in my story. This is a ten minute sketch which I’ve just done of Matthias. He’s a villain who’s mission is to kill my main character. I used black Biro which means getting everything right first time!

I’ve bought so many art apps and tried so many computer programs but now I realise that nothing beats drawing on paper, taking a photograph and uploading your drawing.

It’s much quicker, too, because all the technology gets in the way.

Well, I apologise for not blogging for a while!

At the moment  I’m doing Camp nano which is similar to Nanowrimo but somehow friendlier as you are in a virtual cabin with up to eleven people. In each cabin there’s a message board which is a bit like having a private chat room,  so it’s social and inspiring. Most of us have “met” at previous” November write month”, events so it’s nice to catch up with what everyone else is writing.

The other thing that makes the Camp friendlier is that you don’t have to write 50,000 words, but can set your own goal. I’ve set myself 20,000 words and have written nearly 19,000 already-and there are two weeks to go. You also don’t have to start a new work, so I’m using the camp to continue writing a  fantasy trilogy about magic and time travel.

Here is a sketch of one of the characters in my current novel. Her name is Amelie and she is on a mission to harm my main character, Lucy.

I drew it freestyle on paper in Biro from my imagination, took a photograph using an Android tablet and then uploaded it onto my computer.

I then used GIMP to colour it. This is the first time I’ve used GIMP, so it’s a bit experimental. It seems to have some useful features. The hand at the bottom of the picture belongs to someone who Amelie thinks was snooping outside her bedroom door.

I’ll post the complete picture later in the week.

I like to illustrate my scenes as I write them as it’s fun!

Are you doing Campnano and if so, how’s it going?

The Wrong Spell by Jacqueline Miller

Here is a storyboard/cartoon to advance the plot.

This is my drawing of Princess Fenella who is one of the main characters in a book I’m writing.

I used some apps on my iPad to do the drawing.

Some of the chapters are on this blog.
I need to get myself back on target and finish writing three books. I was very productive when doing a recent 14 day challenge where I had to post a new story every day. I’ve written a few chapters in the month since it finished.

I’m now giving myself a deadline to finish writing the books by 31st October 2014.